According to some statistics, about 260,000 women from low and middle-income countries die annually due to cervical cancer. A lot has been done about this disease that is peculiar to women but there’s not been so much awareness around the topic.

In this regard, Cervical cancer awareness week is a week used to spread awareness of this deadly plague that affects women both rich and poor.

What is Cervical Cancer?

What are the symptoms of Cervical cancer?

For most women, regular symptoms of cervical cancer are usually scarce or easily unnoticeable. Very clear symptoms of this disease usually appear at the later stages, so many women don’t realize they have the disease early on.

Sometimes women could easily have mistaken these symptoms for regular conditions like menstrual periods as cervical cancer causes bleeding, which is regular for many women. Cervical cancer symptoms can also be mistaken for urinary tract infections.

In many instances, these symptoms do not cause or come with other signs, making screening very important for women.

Women who suspect any or all of these symptoms should not ignore them and seek a medical evaluation. Women that are age 21 and older should also go for regular checkups.

According to Healthline, Most cervical cancer cases are caused by the sexually transmitted human papillomavirus (HPV), the same virus that causes genital warts (A small bump on the genitals).

How can cervical cancer be treated?

Cervical cancer can be cured if detected early. The HPV vaccine protects against the types of HPV that most often cause cervical, vaginal, and vulvar cancers. This vaccine is recommended for preteens aged 11 to 12 years. The vaccine is also recommended for everyone through age 26 years if they are not vaccinated already.

Other treatments of cervical cancer include;

This process involves using drugs to kill cancer cells throughout the body. This treatment is given for some time of which afterward your body is given a period of time to recover before another one as the treatment is taken in cycles.

This process is a new age invention, the process is different from that of chemotherapy. The process involves using a drug called Bevacizumab (Avastin)  to block the growth of new blood cells vessels that aid cancer growth. Using this process, doctors can treat and prevent one from precancerous cells in one’s cervix.

What is a Pap smear? 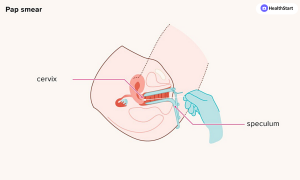 A Pap smear is a test that involves doctors collecting a sample of cells from the surface of one’s cervix. These cells are then taken to the lab to test for precancerous or cancerous changes.

If these changes are detected, the doctor may suggest a colposcopy, a procedure for examining the cervix. During this test, the doctor might take a biopsy, which is a sample of cervical cells.

Do you need a Pap smear test, you can log on to http://www.healthstart.africa to get started with an affordable plan that covers costs for these tests and even treatments.